Timing Belt Materials: Where to start?

Timing belts are an excellent choice for synchronization- but if the timing belt you choose isn’t in sync with the requirements of your project, it’ll make your project unstable and collide in no time.

No one wants their project to diverge from what they have pictured it to be. While timing belts is a great solution for motion control, precision, and robotics, it isn’t your typical belt easily found at a hardware. Its value extends from ensuring that every material you need is in the exact place in the exact time you want, to make sure that everything follows the right rotation, and eventually leading your industry to the direction you want to be.

There are lots of belt types. How do I know which one to choose?

With the variety of belt types out in the market, both standard and custom timing belts, not everything will work well with your project. You have to choose which one will fit your requirements the best.

Here are the belt types which are frequently used as well as how it functions: 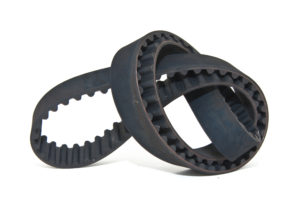 What is it? This kind of belt controls and tracks the movement of an equipment. It has a teeth-like structure which matches the pulley.

How does it work? Timing belts are meant for timing purposes. It works under a constant speed due to the gripping between the belt and pulley. 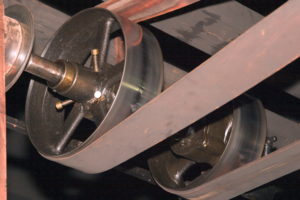 What is it? It’s typically used for power transmission but was replaced by V-belts when it comes to transmission of power in a short-range level.

How does it work? Climbing from the lower to the upper part of the pulley is how flat belts work. Thus, it’s unideal for heavy materials as it’ll tend to slip off. 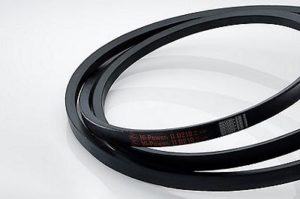 What is it? Compared to flat belts, poly-V belts have wider contact are to belt sheave. It’s typically utilized in peripheral devices.

How does it work? Poly-v belts contain V-shaped ribs which correspond and lines up with its pulley. This ensures that the tension is evenly distributed on the pulley.

What is it? Due to its functionality and practicality, V-Belts is arguably the most widely used type of belt in the market.

How does it work? The name itself speaks for how it works- it forms a V-shape in its cross-section which controls the belts in place so it doesn’t slip off.

Things to Consider When Choosing a Timing Belt

Aside from its type, timing belts go into a complicated series of criteria you should closely look at so as not to compromise the resulting product of your project.

Small details impact the project. From short-term effects up to the long haul. Fret not, we’ve got your backs with that one! Here are the specific things you should consider when choosing a timing belt for your next project.

Apparently, there are different kinds of materials used in timing belts because each has its own specifications to which it can handle certain circumstances.

Timing belts might not seem like it but they are as fragile as glass. This synchronous device might be hampered from working if its operating environment affects its process. Common concerns include:

Depending on where you will use your equipment, its function matters when choosing a timing belt. You should check whether you will deal with material handling, robotics, or thermal sub-systems.

Not every material can handle the requirements for all industries. Thus, the need to conform with application in selecting a timing belt.

Should I go for a standard design? Or opt for something customized for my project? These questions can either make or break your industry. But in reality, it shouldn’t be complicated.

If you agreed with all of these, then we suggest you go for customized timing belts. However, choosing between a standard or customized design impacts your project so much. Should you need any assistance with deciding whether to continue or if you have an existing design and need help, so as to reduce inconvenience and wrong choices, drop us a message and we’d be glad to answer your inquiry.

Don’t let yourself be overwhelmed with the details regarding choosing the suitable timing belt for your project. Let us give you a hand and fire us a message so we can assist you with your timing belt or any precision equipment needs!

WELCOME TO OUR BELT LENGTH CALCULATOR!